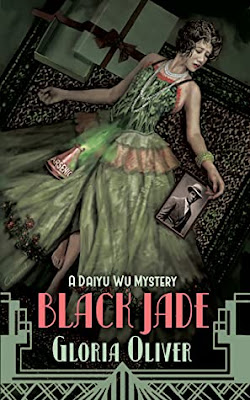 Book Blurb:
Could an old-fashioned ballgown be used to commit murder?

Daiyu Wu is aware that fear of the Yellow Terror has made her nationality a rare breed in the Lone Star State. Being Chinese and blind makes her doubly unique in 1930 Dallas. Despite these impediments, anyone who dismisses her for either fact does so at their peril.

One day, at her family-owned laundry business, Dai detects the scent of burned garlic. With the help of her companion, Jacques, the source is soon discovered. It is a green ballgown. The gown has money pinned inside it to pay for the cleaning, but oddly, it came with no address label to identify its owner. Her extensive knowledge leads Dai to believe someone has committed murder using arsenic. The perpetrator is trying to use White Laundry to hide the evidence. But no mention of foul play turns up in the newspapers, and there's not enough proof to convince the police there's been a crime.

Her curiosity and intellect stimulated like never before; Dai ignores the possible consequences and sets out to solve the mystery with the help of her canine companion, Prince Razor, and her confidant, Jacques Haskins. It's either that or let the killer get away with it — assuming a spoiled popinjay, his jealous self-appointed girlfriend, and Dai's overprotective parents don't get in her way.
Book Review:
A really fun, engaging, fast paced book - I want to read more by Gloria Oliver!

This story starts off introducing us to the super observant and very intelligent Daiyu Wu. She is also Chinese and blind, two things that makes her an outsider in 1930s Texas. The story is from the point of Jacques, her friend/chauffeur/helper. Jacques (not Jackie, as he will remind you!) narrates the story and describes the architecture and clothing beautifully. His voice helps set the scene of Daiyu's world, and we get to know her through him. He is an objective narrator, yet you can see the amount of love and respect he has for Dai. We meet Prince Razor who also has similar feelings for Dai.

She's very intelligent and well-read, and is capable of remembering things and connecting the dots. She still allows her parents a certain amount of leeway while taking care of her, and they're naturally quite protective, not least due to her blindness.

The secondary characters are also quite well-fleshed out. I particularly liked Dr. Aiden Campbell and the popinjay. The parties, clothes, food, and afternoon tea were all so well written, I wanted some wontons, blueberry scones, and some refreshing agua fresca.

I also liked the historical setting of the story, and being a Christie fan, I do have a weakness for historical mysteries. Difference is, Christie was writing about her present day, whereas Gloria Oliver is writing about an almost century old setting. I can only imagine the amount of research it must've taken to get these details right. Plus, I learnt a lot about how the Chinese were treated differently from other American immigrants, which was a surprising revelation.

Dai is great at solving things, supported by her loyal friends and companions. While this was her first mystery, I'd love to read more books in this series for sure!