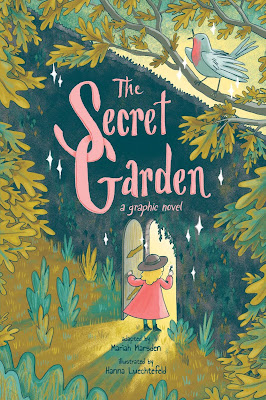 Ten-year-old Mary Lennox arrives at a secluded estate on the Yorkshire moors with a scowl and a chip on her shoulder. First, there’s Martha Sowerby: the too-cheery maid with bothersome questions who seems out of place in the dreary manor. Then there’s the elusive Uncle Craven, Mary’s only remaining family—whom she’s not permitted to see. And finally, there are the mysteries that seem to haunt the run-down place: rumors of a lost garden with a tragic past, and a midnight wail that echoes across the moors at night.

As Mary begins to explore this new world alongside her ragtag companions—a cocky robin redbreast, a sour-faced gardener, and a boy who can talk to animals—she learns that even the loneliest of hearts can grow roots in rocky soil.

Let me preface this review by saying it did not initially contain my thoughts on the original story itself because I erroneously believed that surely everyone must have read The Secret Garden already! It was brought to my attention that this was, in fact, not the case. I recommend this book all the more then, because the story is just so wholesome and beautiful. Oh, and if you can, also do read the original novel.

Mary Lennox has lost her parents, and has been sent to England to stay with her Uncle Craven at Misselthwaite Manor. When she arrives, the moors are dreary and uninviting, just like Mary at the beginning of the book. But slowly, Mary opens up and blooms into a different sort of girl, a happier girl with friends! Her first friend was the little red-breasted robin, who is such a bright character that you can't help but love him. She makes other friends along the way, and the ending is just so heartfelt and touching. Seriously, it's a classic for a reason.

I read the book as a kid and have revisited it over the years. My well worn copy was purchased from a second hand shop and that particular edition is older than I am. So it was really cool to see this book in a different format. I was excited to see the writer's and illustrator's interpretation of the book, to see what they'd choose to leave in, and what parts would sit it out. In a graphic novel adaptation, there are choices to be made and liberties that are taken in terms of what bits make it, because of course every single word and scene is not going to make the cut.

I'm happy to report that almost all the parts I adored made it in, like the announcement about Dickon entering Colin's room to meet him for the first time, with his menagerie in tow. Or about Mrs. Sowerby sending Dickon with seeds for Mary to plant in her bit of earth. The illustrations were fantastic and dreamy, quite in line with the mood of the book, and even better than I could have imagined them to be.

The authors chose to leave out the part about Mary's colonial history - that she lived in India during the British colonial occupation of the country. I'm not sure why they chose to not address it, and actively ignore it, but I can only hope it wasn't erasure of the long years of brutal colonialism and suffering of the land I come from. I will hope, in good faith, that they chose to not address the colonialism simply due to not wanting to bring up something that middle grade children might not know. But then again, why shouldn't they? It's historical fact.

Apart from that, of course, it's a well loved children's book in a format that is sure to appeal to a new generation of young readers who will discover this wonderful book for the first time. I hope they enjoy it as much as I did.

Thank you to Andrews McMeel Publishing and NetGalley for the e-ARC in exchange for an honest review.