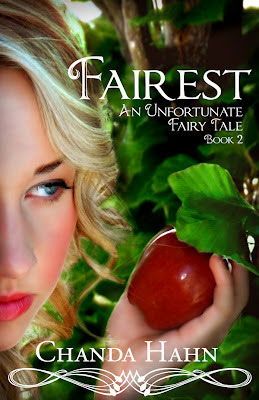 Mirror, Mirror, on the wall,
Who is the Fairest of them all?

In the sequel to UnEnchanted, Mina Grime discovers that all is not fair when it comes to the Fae and their tales, especially when they don’t all play by the rules. Barely surviving the Story’s first fairy tale quest, Mina still has hundreds to go before she can end the curse on her family. But a new player arises to challenge Mina while new rules revamp the game she has just barely begun to understand.

All the while, people are mysteriously disappearing, including Jared, whom Mina must finally determine to be friend or foe. And with the loss of her greatest weapon, Mina must try to outwit a deadly hunter. Can Mina survive the most difficult quest yet while protecting those she loves from falling victim to one of the lethal tales of all? Or will she become a pawn when she strikes a bargain with the Queen of Fae?

Fairest, the second book of ‘An Unfortunate Fairy Tale’ Series is one of my favorites in the series. Check out the review for the first book here.Wilhelmina 'Mina' Grime, has found out her family secret and is out to make her mark in history by succeeding the task set for her by her ancestors – live out the hundreds of fairy tales that the royal Fae will throw at her and come out alive so that she can send all the Fae living on our plane back to the Fae plane. Mina is going to face another very famous tale in this book and it will show her just how unpredictable the Story can be. We learn more about Jared in this book - his role in Mina’s life, how he’s connected to the Grimoire, his powers and limitations. We see more of Nan Taylor and the wonderful friend that she is to Mina. Brody Charmichael spreads his wings from being just a love interest to being more than the boy that Mina likes. We also get to know the rules by which Fae are bound no matter the world they live in and the justice served to the stray Fae. This too plays a part in Mina’s curse and how she will start to own up her destiny.The best part of this book for me was that the author explored the dark side of the protagonist. A hero need not always be right or the most virtuous person in the story. And yet they remain heroes because they learn from their mistakes and correct them, they accept help when they need it graciously, even when it comes from the most unexpected places. Mina learns this lesson in ’Fairest’. She learns that everything isn’t as they seem and though it looked like she might take control of her destiny, the Story was still very much in charge of things.

A person who loves to not just read books, but bring forth the characters to life inside her head; then she loves them, hates them, studies them like specimens, and analyses their redeeming qualities and flaws, all the while wishing she were a part of the story and its universe.
PS: she also loves long sentences.
View all reviews | Are you a writer?
2019 4 stars book reviews fantasy magic young adult