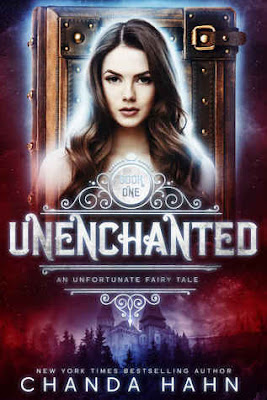 Mina Grime is unlucky, unpopular and uncoordinated; until she saves her crush's life on a field trip, changing her High School status from loser to hero overnight. But with her new found fame brings misfortune in the form of an old family curse come to light. For Mina is descended from the Brothers Grimm and has inherited all of their unfinished fairy tale business. Which includes trying to outwit a powerful Story from making her it's next fairytale victim. To break the fairy tale curse on her family and make these deadly occurrences stop, Mina must finish the tales until the very Grimm end.

UnEnchanted, the first installment of ‘An Unfortunate Fairy Tale’ Series, is a short and sweet book with an amazing concept.I love fairy tales - the originals, regional versions, modern retellings, all of them. This book is a bit of all of the above and yet about none of them entirely.Wilhelmina 'Mina' Grime, a clumsy, wallflower at Kennedy High, finds out that her ancestors are the actual Grimm brothers and did not just write the fairy tales but lived them. The Grimm brothers had found out that the Fae are real and roamed around in the world as we know it. In an effort to send them back to their realm, the Grimm brothers struck a bargain with the ruling Fae. As a result, her ancestors have been trying to live out fairy tales and complete them; although none have succeeded yet, not even her dead uncle or father. Now, it is Mina's turn - she has to succeed to keep her family safe! However there are more forces at play than Mina knows.Mina is a teenager who is good at heart and rises up to the occasion as adventures demand her to. She keeps you entertained with her clumsiness and drama. Her BFF, Nan Taylor, is one of my favourites in the story, a sensible, wise and loyal sidekick, except Mina is the sidekick as per the high school matrix of popularity. Brody Carmichael, her crush at school, is 'the perfect guy' and their love story is very cute. And the mysterious element of the story is Jared, an irritating, annoying and possibly supernatural guy that Mina has to put up with along with the Grimm curse. After Unenchanted, I went on to read the second and the third and so on until I finished the series. The plot starts to thicken in the second book, in my opinion. But the first one definitely gets you interested.
For the entire series, I would even give a 5/5. If you're into YA fantasy books, you should give this book a try!

A person who loves to not just read books, but bring forth the characters to life inside her head; then she loves them, hates them, studies them like specimens, and analyses their redeeming qualities and flaws, all the while wishing she were a part of the story and its universe.
PS: she also loves long sentences.
View all reviews | Are you a writer?
2019 4 stars book reviews fantasy free on kindle magic young adult