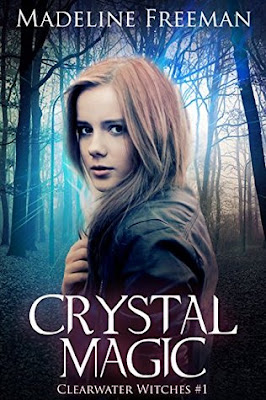 Nothing is safe around Kristyl Barnette. Windows break. Books rocket across the room. Lights flicker. Strange occurrences follow the sixteen-year-old everywhere. When tragedy forces her to move to the small town of Clearwater, Michigan, with her estranged aunt Jodi, Kristyl tries to leave her past behind. But Clearwater has secrets of its own—a mystical history that intersects with Kristyl’s life and might shed light on the inexplicable events that plague her. When a mysterious illness threatens her aunt’s life, Kristyl will do anything to cure her. Enlisting the help of witches could save Jodi, but is dealing in magic worth the consequences?

Kristyl Barnette (I winced at the spelling, too, guys) is a witch as the title of the series and the book summary indicates. We get to see her fresh start at high school in the town of Clearwater when she moves in with her aunt, Jodi who runs an herb shop. She finds out about her mystical abilities and the relevance of her genealogy, goes through the high-school jungle to find her own place in the food chain, makes a few friends and enemies and… read the book to find out what happens next, guys!Despite a few of the YA fantasy clichés, the book kept me entertained and even surprised me at certain points. Clearwater, the quaint town where the story unfolds is full of mysteries under the surface. The history of witchcraft that the author has ingrained into the background of this town is just as enticing as the characters portrayed in the story. While the teenager heroine might seem like a little slow to catch up on things, she definitely has a strong moral compass and is emotionally aware, which I found quite refreshing. The narration of the story through Krissa (isn’t this nickname better than the real name?) is very relatable - which I appreciate a lot, because if not, the plot is difficult to go through, since we just cannot agree with the perception of the narrating character. We disagree with their thoughts constantly, fight with their internal monologues which constitute the story, disagree with their choices that progress the story and so on (speaking from experience).Since the story ended on a cliffhanger, I went on to read the second book in the series and I have to admit that it was extremely intriguing. While Crystal Magic felt more like the pilot episode of a series, the plot definitely thickens and keeps you entertained. I would definitely recommend the rest of the series for lovers of fantasy genre.PS: Subscribe for a review of the second book, Crystal Wild by Madeline Freeman, coming soon!

A person who loves to not just read books, but bring forth the characters to life inside her head; then she loves them, hates them, studies them like specimens, and analyses their redeeming qualities and flaws, all the while wishing she were a part of the story and its universe.
PS: she also loves long sentences.
View all reviews | Are you a writer?
2019 4 stars book reviews fantasy free on kindle magic paranormal young adult